Dogs truly are man’s best friend—and that is never more evident than in the heroic roles they serve in partnership with our country’s military, police, and first responders. This month, Columbia Pike Animal Hospital pays tribute to the working dog—from the homefront to the front lines, these canines and their human partners are awe-inspiring examples of courage, dedication, and teamwork.

Police dogs have been used since the early 1900s, but only in the early 1970s did the K-9 officer’s role become clear, their training reliable, and their value evident.

The modern police dog is purpose-bred, evaluated, and task-trained to ensure they have the necessary drive, motivation, intelligence, and physical ability that the work requires. The most popular breeds are often tenacious herding breeds and superb scenting dogs, including:

Police dogs undergo two to three years of rigorous training. Graduates are then certified as either dual or single purpose canine officers in the following areas:

Like their uniformed human companions, police dogs put their lives on the line every day, and don’t back down from danger. In addition to local, state, and federal police organizations, police canines are employed by the Drug Enforcement Agency (DEA) and United States Border Patrol.

While dogs have been used in battle since 600 BC, the modern military dog is more than a weapon or a battlefield messenger. The 1,600 U.S. military working dogs (MWDs) currently in service are respected and valued as full-fledged soldiers. Similar to police canines, MWDs are selectively bred and extensively trained and tested, to meet the unparalleled demands and challenges of their high-pressure work environments.

Military working dog skills include detection, apprehension, patrol, and search and rescue. Dogs must be sound and courageous when threatened, capable of great athleticism, and adaptable to harsh or demanding situations, including helicopter jumps or evacuation, aircraft carrier flight decks, battlefields, and brutal environments, including deserts, jungles, or natural disaster sites.

Detection dog teams may be used to sniff out landmines, improvised explosive devices (IEDs), accelerants, or other explosive compounds. Patrol units rely on the powerful canine nose—considered 10 to 100,000 times stronger than ours—to keep them alive, so they can carry out their mission.

This trust and dependency inevitably creates an intense handler-dog bond, and when these beloved four-legged heroes are retired from active duty, they are often adopted by their handlers or their handler’s family.

Search and rescue (SAR) dogs and their handlers work to locate persons or groups who have disappeared and may be in danger. SAR teams are highly trained and mostly volunteers, but must be certified by organizations such as the Federal Emergency Management Agency (FEMA) or the American Rescue Dog Association. Teams may specialize in a specific search type or environment, including:

The dog’s incomparable scenting ability can follow a trail for miles, identify decades-old remains, and indicate a target odor buried deep underground or underwater. The SAR dog’s abilities are cultivated and honed from an early age—sometimes as early as 6 months—but may take years before certification. In addition to superb scenting skills, dogs must be physically capable of meeting environmental challenges, incredibly focused, and well-socialized to people and children, because they must be gentle comforters for the found—and likely frightened—person, as well as the family of the lost or deceased.

To protect a SAR dog’s confidence, and prevent mental fatigue or depression that can come from failed searches, handlers will often set up a mini search that involves a fellow handler. This gives the dog an easy win, boosts their morale, and lets them receive their reward, which is often a beloved toy or treats. 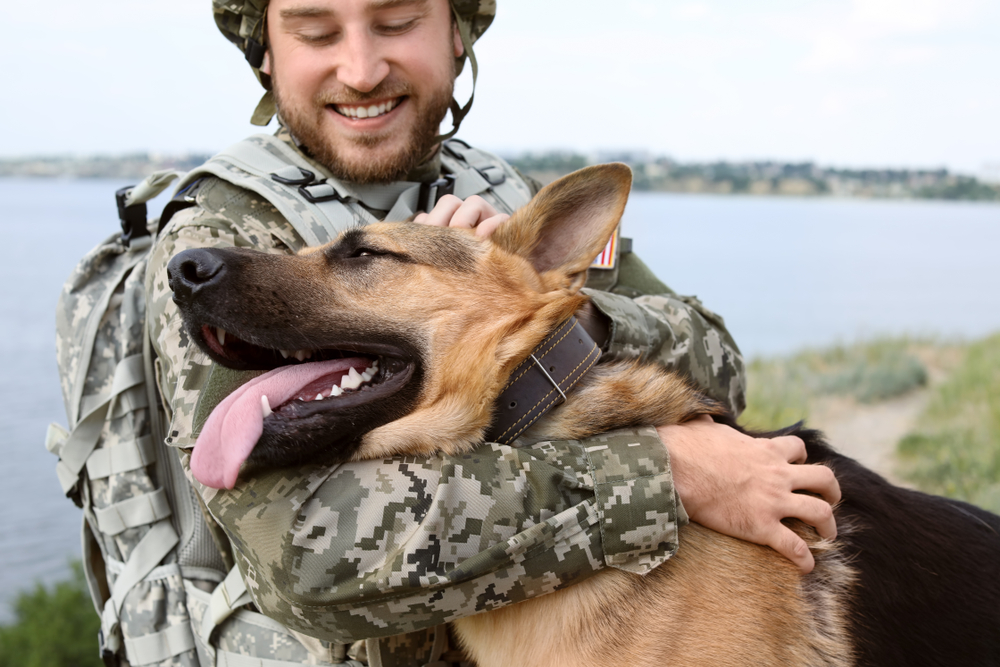 The original guide dogs (i.e., “seeing eye” dogs) began in Germany after World War I, and canine companions have been providing highly skilled aid to injured and disabled humans ever since. One such way is pairing assistance or support dogs with military veterans. American heroes who return to civilian life may face new mental and physical challenges. Support dogs fulfill a range of roles, including assistance with daily tasks, alerting or comforting their handler through panic attacks, and providing reliable companionship and unconditional love.

These dogs aid military veterans in adapting to their new lives and—perhaps most importantly—help them feel less isolated, a common cause for depression and veteran suicide.

Are there any limits to what man and dog can do together? These courageous canines and their heroic humans suggest not. One thing is for certain—we can’t thank them enough.

Does your civilian canine need a physical exam to ensure they’re fit for patrolling your yard? Contact Columbia Pike Animal Hospital for all your routine and emergency veterinary care needs.